The crossover that most will like and none will truly love 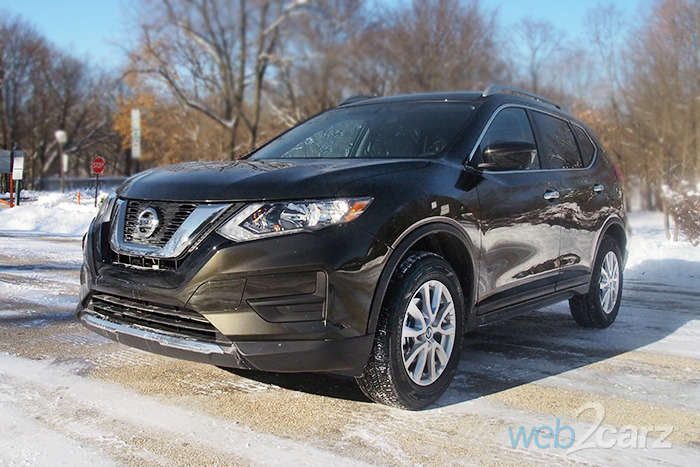 
We rarely have high expectations from popular crossovers when it comes to the driving experience, and the same goes for the Rogue. Except when you look at it, you at least hope it's a little fun to drive because of the styling. The result, however, is a rather boring drive. The base engine only spits out 170 hp when it's competition has more. Combine that with an uninspiring CVT, numb steering and floaty handling, and about all you can say is that it's got a decent ride.

Acceleration: The CVT does this CUV zero favors. Slow to respond and essentially sluggish, we never felt confident passing or punching the gas on the on-ramps.

Braking: The brake pedal is a bit numb but still decently progressive. The nose of the Rogue likes to dive a lot, though.

Steering: Typical CUV numbness in the steering. Feeling the road was only something we had hoped for.

Handling: Too much body roll for our liking. It inspired little confidence in the curves.

Nissan worked pretty hard on updating the Rogue's exterior but didn't seem to bother much with the interior tech and controls. The buttons are hard to read, the screen is a bit on the dull side, and nothing seem organized in the layered menus. They don't even offer Apple CarPlay or Android Auto. In these areas, it seems Nissan is playing catch up to its competitors. Hyundai, Kia and Ford do it much better.

Infotainment System: We're just not big fans of Nissan's infotainment system. The 7-inch screen is just ok. It has dull graphics and can be overwhelmed by inputs with poor responsiveness.

Controls: We like the physical knobs for climate and audio, but the buttons that flank the screen are hard to read and look crappy.

Bluetooth Pairing: It was a bit finicky at first but once paired, the system worked fine. We were able to make phone calls and stream audio without a problem.

Voice Call Quality: Clear and crisp. No issues with the phone calls on either side of the line.

Remember what the first-gen Rogue looked like? Not really? Well, we don't blame you. It wasn't bad looking, but it was about as forgettable as a manila folder. The new Rogue is a serious improvement that adds more contours and creases where it counts. The overall look is very pleasing, and designers did a good job by not overdoing the styling like they did with the Murano. The 2017 nonhybrid Rogue update was mostly superficial but brings a more upscale vibe. Its face was restructured to bolster the V-Motion design theme, the head- and taillamps were reworked, and more chrome accents were added.

Front: The V-Motion grille is bold and big, and the chevrons in the daytime running lights and parking lights look great.

Rear: The V-shaped taillights are handsome, and the two horizontal chrome strips are tastefully done, breaking up the visual height.

Profile: The view from the side is surprisingly clean, eschewing the Murano and Maxima's tendency to go nuts. Thankfully, there's no floating roof on this one.

Cabin: Despite some interior changes like a flat-bottom steering wheel (for racing, right?), a redesigned center stack and some new interior finishes, we don't especially like the interior of the Rogue. The cloth on our tester also had a weird pattern we could've done without.

In SV trim and with a few options, the Rogue is pretty comfortable. It's the Rogue's best selling point, but it can't make up for the rest of the car. The heated seats work well, as does the heated steering wheel... perfect for this cold Chicago winter. We also loved the easy-to-use remote start that warmed things up nicely before the subzero commutes. There's enough space for tall occupants, Other Rogue SL features make the driver's life easier. You can even opt for a third row for smaller folks, but it compromises cargo space.

Front Seats: Decent support but could use a bit more cushioning. The cloth doesn't feel especially good to the touch. At nearly $30K, this CUV really needs leather.

Rear Seats: Decent headroom and legroom thanks to the sliding track and the ability to recline for those longer trips.

NVH (noise/vibration/harshness): The Rogue is pretty quiet on the road except when the 2.5-liter four-cylinder is under duress, which feels like most of the time.

Visibility: Visibility was good, and the additional 360 camera made managing tight spaces that much easier.

Climate: The climate control system worked very well, and we had no complaints about its operation.

One thing the Rogue has on its side is great safety. From solid crash test ratings to a good set of standard features, you won't question its ability to protect its occupants or even prevent an accident, thanks to great accident avoidance tech.

Optional Tech: Our SV was outfitted with the Around View Monitor and Moving Object Detection.

The Rogue shines in 5-passenger mode with a plentiful amount of cargo space and good storage options in the cabin. Choosing the five-seat model provides Nissan's excellent Divide-N-Hide cargo system that delivers multiple configurations, such as a raised or lowered rear floor, a shelf, or hidden compartments. Too bad this much thinking didn't go into other aspects of the car.

Storage Space: The center armrest was well-sized, and the tray in the center stack was conveniently placed. We just wish it was deeper to keep things in place during more spirited turns.

Cargo Room: With the seats up, the Nissan's cargo space is pretty good at 32 cubic feet; folded down, there's a capacious 70 cubic feet, enough for a well-appointed weekend trip.

The Rogue is up there in terms of EPA ratings, offering 25 city / 32 highway. The CVT certainly helps, but the Rogue suffers in the performance category. We're guessing most buyers are drawn more by the fuel economy than by the Rogue's 'acceleration'. In fact, our mileage suffered because we were constantly flooring the Rogue in order to get into highway traffic and stay with the speeds.

Driving Factors: we drove mostly in the suburbs but took some jaunts on the highway. We were always mashing the gas in order to extract some semblance of speed. The 25 mpg combined rating seems unattainable to us unless you have no particular place to be anytime soon.

The audio system was just acceptable. There wasn't much fullness to the sound, and the base seemed wanting. The Bose Premium Audio system might be worth the upgrade.

The Rogue is a crossover that will please most people. It's comfortable, attractive to look at and decently appointed. When it comes to tech and the driving experience, however, the Rogue fall well behind its competitors. The new Mazda CX-5, Honda CR-V and the Toyota RAV4 are better values and offer more driving fun. That being said, it's hard to imagine anyone who will be seriously disappointed by the Rogue. It does what it needs to do and keeps its occupants comfortable. Just don't expect it to drive the way it looks. We hope that Nissan takes the time to update the infotainment system and provide the next Rogue with better steering, handling, power and maybe even a stepped CVT that simulates shifting.