Excels at nothing and just ok at some things 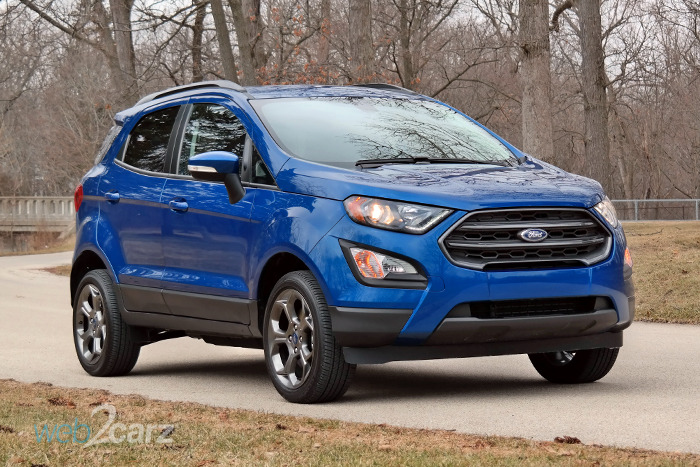 
The EcoSport is one of those vehicles that's just okay when it comes to the overall driving experience. It's neither fun nor totally disengaging, which doesn't bode well for it in a segment where others fare far better behind the wheel.

Ride Quality: For such a short wheelbase vehicle, the EcoSport is actually pretty good on-road. The SES is a bit firmer than the lower trim models, but it still manages bumps well without being upset.

Acceleration: The naturally-aspirated 2.0-liter four isn't quick, but throttle response is good. It'll hit 60 mph from a standstill in a slow 9.4 seconds. It's on par with the Honda HR-V (9.5 sec), faster than the Toyota C-HR (11.5 sec), and way slower than a turbocharged Kia Soul (6.3 sec). The transmission downshifts well, despite its roughness at times.

Braking: Brake pedal feel is progressive with no mushiness, and the EcoSport stops well.

Steering: Steering is pretty good in the EcoSport, though it lacks feedback. It's on center, and turn-in is decent.

Handling: There's minimal body roll, but the tires are narrow, and the body is tall. Don't hammer it into any corners.

Sync 3 continues to impress us as one of the better systems out there. It's one of the EcoSport's most redeeming qualities.

Infotainment System: Our top trim tester had the big 8.5-inch Sync 3 touchscreen, and it's very responsive to inputs. Menus are intuitive, and the screen is vivid and easy to read.

Controls: We like the convenient layout and easy access of the EcoSport's controls. Physical knobs for audio and climate make it easier for drivers, and the steering wheel controls are, likewise, easy to use.

It's hard for us to get remotely excited about the exterior design of the EcoSport. It just looks awkward to us, and comes across as a poor compromise of econobox and crossover.

Front: The big light housings and grille seem too large for such a stubby front end. The hoodline also looks too high.

Rear: It looks like a shrunken Escape only taller and narrower. The large grey plastic bumper is prominent.

Profile: This is the shot that makes it look like a roller skate. Only the short front and rear overhangs help its diminutive size.

Cabin: The orange accents inside give it a sportier look and feel, but you can tell that the materials are on the cheap side.

No one will get the impression of airiness and opulence here. The interior isn't spacious by any means, and it's really only moderately comfortable for two people and small children.

Front Seats: The seats are decent, though the cushions feel a bit hard. The seat fabric is a bit too low-rent for our liking. Riding position is also tall-ish.

Rear Seats: The cushions are way too high, and there's not much headroom and even less legroom. Not even averaged sized adults should sit back here for more than 15 minutes.

NVH (noise/vibration/harshness): Highway speeds are actually fairly quiet, but when the engine is pushed hard, things get noisy inside.

Visibility: The front is compromised by the rising hood and thick A-pillars. The superfluous triangular small side window doesn't help matters. Out the back, the sightlines are compromised, as well. The rear camera and blind spot monitor are imperative.

The EcoSport hasn't been crash tested yet, but it does come with some basic safety features.

Standard Tech: In SES trim, the vehicle comes with a Blind Spot Information System, a backup camera, and a tire pressure monitoring system.

Though no one expects the EcoSport to be huge inside, it's actually not bad. We just wish the cabin compartments were bigger and that the second row folded completely flat.

Storage Space: There's a small armrest and a couple of cubbies for daily items, but none of them are particularly large.

The much bigger Ford Escape actually does better on the highway and provides more usefulness and style. The EcoSport could benefit from at least one more gear for highway efficiency.

Driving Factors: We drove it only short distances on the highway and local roads, extracting as much as we could out of the small engine.

The SES level gets an upgraded 7-speaker audio system that works fine, but the small cabin doesn't provide a great aural experience to begin with. It's only a one speaker upgrade from the 6-speaker stock system.

Final Thoughts In a crowded segment, there are now quite a few subcompact crossovers to choose from, and the EcoSport even in top trim is a hard sell. It's not exactly fun to drive, nor is it particularly attractive. Its high points are the smooth ride and solid infotainment system, bu the rest of it feels sub-par. The back seat is virtually useless by adults, and the fuel economy is shockingly bad for its size. The Mazda CX-3 drives far better, the Kia Soul is better built, and the Jeep Renegade is more fun. We suggest you look elsewhere.