Infiniti's sexiest car in years is a bit of a contradiction 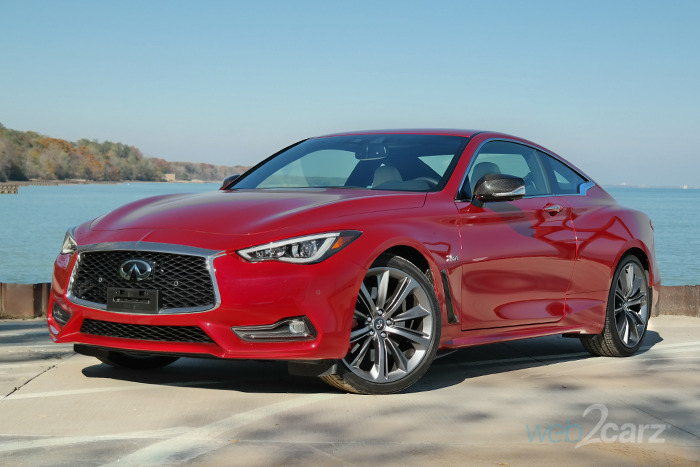 
A car this racy looking should be able to back it up, and the top trim Red Sport 400 has, yep, 400 horses. This trim level is right quick, but a couple of demerits keep it shy of being truly revelatory to drive.

Ride Quality: Its' a firm ride but not overly harsh. Just know that it's a performance-leaning coupe and won't be cushy in city driving.

Acceleration: 0-60 in 4.5 seconds is seriously fast, but the experience suffers because of the rough shifts of the 7-speed transmission.

Braking: Superb brakes that are progressive and powerful.

Steering: The Direct Adaptive Steering is weird and disconnected. It's hard to feel like you know what the car is doing. It feels artificially sharp, so stick with the regular steering system.

Handling: The 4,024-lb car isn't light, but it corners flat and keeps the body roll well in check.

Any automaker who thinks two screens are better than one needs to rethink things. It takes the driver some time to figure out which screen does what, and even then it's a bit odd.

Infotainment System: The upper touchscreen shows navigation, while the lower screen manges the audio system and smartphone apps. They're crisp and clear, but the fact that there are two makes it confusing. They also wash out in sunlight and gather fingerprints like crazy.

Controls: The controls are a bit befuddling since there are two columns of climate control buttons that flank the lower screen, as well as a row of audio buttons below it. Infiniti should've used one screen and two rows of buttons. Way easier.

Since BMW and Mercs are ubiquitous, and the Lexus RC is a bit polarizing in style, it's nice to see Infiniti deliver a truly beautiful coupe that looks incredible coming and going. The interior also looks stunning, though it does lack some of the refinement and build quality found in its competitors.

Front: The big mesh grille looks great with the angry LED headlights. It looks like a cat ready to pounce.

Rear: The thin taillights look great on an uncomplicated tail section, all punctuated nicely by twin round tailpipes that are always better than ellipsoid versions.

Profile: Tight dimensions give it an aggressive look, but the simple creases and curves lend some elegance. Our only chagrin is the rear window's attempt at BMW's Hofmeister kink. It just looks weird when Infiniti does it. Originality is hard to copy.

Cabin: The gorgeous white leather seats are well-shaped and attractive, and the use of silver carbon fiber trim is brilliant. Too bad there's a bit of disjointedness in the interior design.

Coupes aren't the roomiest segment in the industry, but Infiniti does a good job here.

Rear Seats: The sloping roof cuts down on headroom, but medium sized adult can sit here without discomfort.

NVH (noise/vibration/harshness): The cabin is quiet and without any vibration or squeaks. It's very hushed at high speeds.

Visibility: Forward and side visibility are very good, but as with most coupes, the rear sightlines are compromised due to thick pillars and a taller decklid.

Climate: Good heating and cooling from the system. As mentioned before, we just don't like the button locations.

The Q60 has not been crash tested yet since it's a fairly new model in the industry. Our tester did come with quite a few safety technologies as options, though.

Standard Tech: Aside from the requisite airbags and traction/stability control, there's not much as standard equipment. Our tester had brake assist and individual tire pressure monitoring.

Coupes are never known for their storage space or cargo capacity, and that's not why people buy them. They tend to be image or performanced-based cars, or both. The Q60 does a respectable job with cargo but no much with cabin storage.

Storage Space: The cabin storage options are sacrificed for style. The small center console compartment with the retractable door isn't big enough to hold more than a small set of keys. Most of your stuff will get relegated to the cupholder and center armrest.

Cargo Room: The trunk has 12.1 cubic feet of space, about average for the segment. The 4-Series eclipses it with 17 cubic feet, and the C-Class is smaller with a mere 10.5.

For a car that really begs to be hammered from stop lights, the fuel economy isn't terrible. That being said, you do pay at the pump when your car has 400 horsepower and a bit of weight.

Driving Factors: We drove the Q60 in Sport+ mode the majority of the time and pushed the throttle pretty hard. Better fuel economy numbers from more conservative driving should be no problem.

Our tester came standard with the upgraded Bose Performance Series Audio with 13 speakers and Bose Centertpoint Surround Sound, which sounded fantastic with all types of music. It was loud, clear, and there was no distortion. Bass was also very good.

Final Thoughts Infiniti has made their most powerful and most attractive coupe to date. In top trim, the Q60 is quite expensive, but it comes with some excellent safety features and a very silky engine that sounds great. Too bad the car is compromised by odd in-car tech, a disjointed interior, and a strange Direct Adaptive Steering that automatically comes with some important packaged safety technology. It's best to spend less for a trim level that's a bit less powerful but still just as attractive, which is the Q60's strongest suit.