If you love silence but not driving 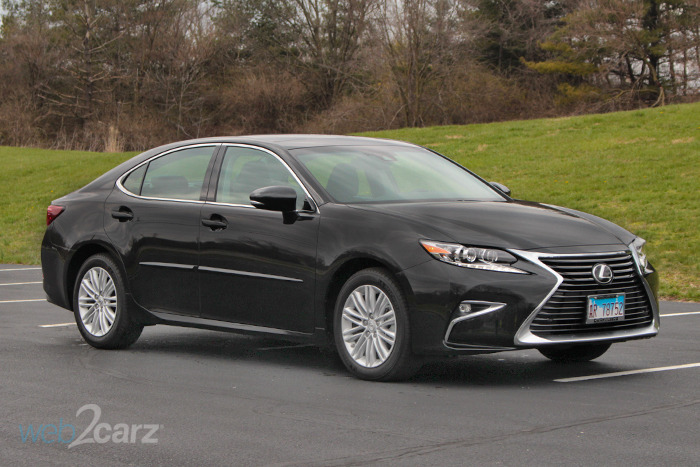 
The Lexus ES is not the luxury sedan to buy if you're looking for something fun and sporty. It's designed and built for the person who wants a comfortable cruiser. For a driver who seeks a quiet cabin, smooth ride, and a V6 engine, the ES 350 is your ticket to bliss.

Ride Quality: The ES 350 does an excellent job soaking up bumps and rough pavement. The driver and passengers are insulated from the road considerably.

Acceleration: Throttle response could be better, but the V6 engine delivers thrust authoritatively once power arrives. Lexus claims a 7.1-second 0-60 mph time. You'll have no trouble keeping up with traffic or merging or passing on the highway.

Braking: The brakes are progressive and strong. We found them more than satisfactory.

Steering: There's enough heft to the steering, but it's numb and imprecise.

Handling: The soft suspension, taller tires, and vague steering mean you're not going to enjoy this on a tight and technical mountain road. Find some long sweepers or straightaways and you'll be a lot happier.

Lexus gives the ES 350 plenty of features. There are buttons on the dash for controlling many of them, but the company still insists on keeping its weird mouse controller thing. We're not huge fans. It makes accessing the tech and features the ES has more difficult than it should be.

Infotainment System: The Lexus Enform infotainment system is decent, but at this point it's behind the competition. You don't get features like Apple CarPlay or Android Auto. The 8-inch screen is large, but the graphics could use some improvement. Also, the user interface could use a little work.

Controls: The main controller for the infotainment system is a mouse/joystick controller to the right of the shifter. It's an interesting design, but it's too hard to use while driving. The dash and steering wheel buttons help, but sometimes you have to use the controller.

The Lexus ES is an attractive sedan. It's not racy or as exciting as some people might want, but it brings the company's corporate grille and some sleek styling elements that can't be overlooked. That said, those styling elements can't hide the fact that underneath it's a Toyota Avalon.

Front: The large grille and chrome border present a bold face to the world. The lighting-bolt-shaped headlights and triangular fog light housing complete a pretty busy front end. It's not ugly, but there's a fair amount going on here.

Rear: The L-shaped taillights and chrome bar are the main styling elements of the back of the car. It's more conventional than the front, and that's a good thing.

Profile: From the side, the ES displays a typical sedan silhouette. You can easily see how the vehicle is related to the Toyota.

Cabin: The cabin of the car features many different materials and layers, but it's not completely unattractive. It's a far cry from BMW and Mercedes-Benz, though.

The ES 350's strongest area is comfort. The spacious cabin invites you to stretch out, and the seats offer plenty of support. The HVAC is powerful, and no matter how long your drive is, you'll probably arrive feeling really good.

Front Seats: The front two seats are very well-supported and offer plenty of adjustment. The thick and soft leather upholstery is top-notch. There's plenty room even for tall drivers.

Rear Seats: The rear seats are very similar to the front. They offer high-quality leather upholstery, plenty of headroom and legroom, and tons of supportive cushioning.

NVH (noise/vibration/harshness): The ES is one of the quieter cars we've driven. It feels very solid and road noises were at a minimum.

Visibility: Seeing out of the car is easy. The pillars of the car aren't too thick, making sightlines better than in some other cars. The backup camera helps, too.

Climate: The climate control system was powerful and worked quickly. The heated and ventilated seats were also very powerful. The heated steering wheel was a nice feature to have, but with the wooden steering wheel, only the non-wood part of the wheel heats up.

The Lexus ES receives excellent ratings from both the IIHS and the NHTSA. There's also plenty of safety equipment, though a monroney was not provided with our test vehicle.

IIHS Rating: The IIHS gave the ES a Top Safety Pick rating. It missed out on the top honors due to its 'acceptable' rating for its headlights.

Optional Tech: Our tester didn't come with a monroney, but we did notice it was equipped with adaptive cruise control and blind spot monitoring with cross-traffic alert.

The ES does a decent job when it comes to storage space inside the cabin. The weird mouse controller that Lexus uses does take up some valuable space on the center console, though, and other automakers tend to do a better job.

Cargo Room: The trunk offers 15.2 cubic feet of cargo space, which is on par with the competition. Also, the trunk opens wide, so loading and unloading should be pretty easy.

The Lexus ES isn't the most fuel efficient car in its class, but it does a decent job. Over the course of the week, we saw numbers pretty close to the EPA estimates, but push the car much and you'll see mileage begin to drop quickly.

Driving Factors: We drove mostly in the city with a few runs on the highway. We kept the car in normal driving mode for most of the week.

The standard eight-speaker sound system is plenty loud enough and offers good amounts of both treble and bass. While we thought it was a quality system, Lexus also offers a 15-speaker Mark Levinson premium surround sound system. It's included on the $2,615 Navigation/Mark Levinson Premium Audio Package which comes with several other features.

Final Thoughts The Lexus ES 350 will have a fresh, new look for 2019, with a redesigned model. However, if you want a comfortable sedan to cruise around in, the 2018 version of the car makes a lot of sense. It's a luxury sedan that knows its audience. It isn't trying to be some kind of pseudo-sports-sedan. The ES is refreshing because of its honesty. That said, most enthusiast or really anyone wanting an engaging drive will find it boring. If you don't care about having a sporty sedan to drive daily and don't mind the funky mouse controller for the infotainment system, the ES 350 is a smart choice.