The MINI that can't decide what it wants to be 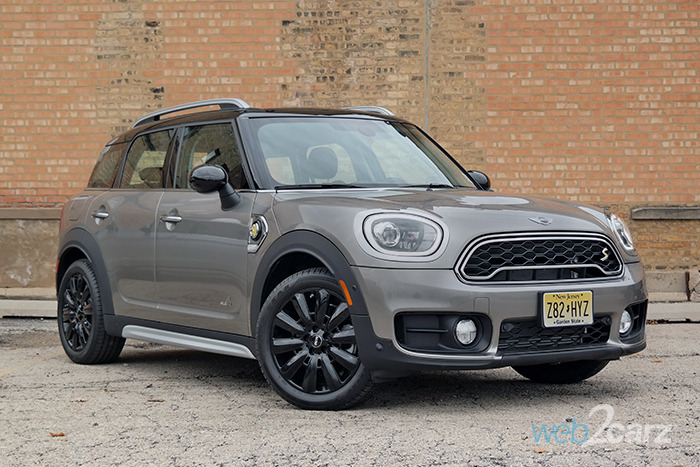 
MINIs have the reputation for being nimble vehicles due to their compact size and taut chassis. The plug-in hybrid Cooper All4 is more fun to drive than its size would communicate.

Ride Quality: The S E Hybrid feels appropriately firm without being jarring. The larger wheels and sporty suspension prevent it from feeling anything resembling cushy, but we never felt uncomfortable.

Acceleration: This is surprisingly fast thanks to the electric motor, and the S E All4 launches from 0-60 in 5.9 seconds, but the speed is a bit muted because of the way the car feels.

Braking: The worst part of the driving expereince with long braking distances and a big dead spot at the top of the pedal that feels totally disconcerting.

Handling: This is not a light small crossover, weighing in at 3,915 lbs. There's body roll when pushed, and some obvious understeer.

The S E All4 has the standard round MINI infotainment screen frame, and it's meant to evoke fun, but it can be a little weird and trendy for some. Case-in-point, the ambient light ring around the infotainment screen. It's just to kitschy for our tastes, but it certainly has youth appeal.

Infotainment System: It's definitely a departure from more common systems and even from BMW's own iDrive. We weren't big fans, and it's actually a bit strange to see a medium-sized screen in such a huge circular frame.

Controls: Thankfully there's an audio knob and physical buttons, but most of the infotainment controls are on-screen or via the center MMI-style control knob and buttons, which are quite easy to use. The toggles are still there, but we don't like the start/stop located in the middle as a large toggle. It's just not intuitive. The shift knob is also oddly tall and weird to grip.

The Countryman is actually our favorite model styling-wise int he MINI lineup. It strikes the right balance of compact-cute and rugged with good proportions and solid presence. Far better than the Clubman. But the S E Hybrid adds some styling elements we could do without.

Front: It looks great from this angle with a right-sized black mesh grille and nothing overstyled except for the overuse of chrome in the headlight surround.

Rear: Simple but large taillights are great, and it eschews the tall look that so many crossovers do thanks to the shorter greenhouse. We don't like the three badges, and it would be nice with a second round tailpipe.

Profile: The blackened trim around the wheelwells, roof, side mirrors and wheels are great. The slightly sloping greenhouse is well done. We just don't like the charging port door with the huge chrome and lime green 'e' and gimmicky plug that ruin an almost classic look.

Cabin: MINI likes quirky, but it gets old fast. There's just a lot going on, and the fuel gauge is weird and too hard to read.

MINI build quality has come a long way, and the S E Hybrid showcases what might be the best in the lineup in terms of overall comfort.

Front Seats: A bit on the hard side but adjusts well and provides good support. We're always big fans of extendable thigh bolsters, present on our tester's sport seats.

Rear Seats: Adults can sit here, but only for those of average height. Seating is on the firm side but comforatable enough.

NVH (noise/vibration/harshness): The S E Hybrid does a decent job at keeping noise at bay, and we didn't hear any creaks or rattles. The small displacement gas engine stayed pretty hushed, as well, unlike so many other hybrids.

Visibility: Front and side visibility are good, but the short rear window and thicker D-pillar make rear visibility slightly challenging.

The MINI Countryman model scores well in crash testing but not at the top of the heap There's also not much in the way of accident avoidance technology, even as optional equipment.

IIHS Rating: It fails to nab the Top Safety Pick or Pick+ ratings, but scores 'good' in all crash testing areas but only a 'marginal' for headlights.

It's not huge inside, a bit larger than the Kia Soul but smaller than the Honda HR-V . At least the space is usable and the 40/20/20 split folding second row provides some versatility.

Storage Space: Not much to speak of in the cabin, only a shallow armrest, small door pockets, and a binnacle below the center stack.

Cargo Room: There's 16.5 cubic feet behind the second row and 41.3 cubic feet with all the seats folded flat. There are some convenient cubbies to cram smaller items in, which is a nice touch.

Other than the added power from the electric motor or the appeal for urban commuters with short daily distances, the mere 12 miles of electric-only range from its 7.6-kWh battery pack is a bit disappointing.

Driving Factors: We pretty much ignored the electric only range, driving the MINI for its impressive acceleration. We drove it Sport mode pretty much all the time.

The stock 6-speaker system is very good for non-premium audio. It was clear with no distortion but lacked some bass. Younger customers who are audiophiles might want to opt for the Premium Package to get the upgraded Harman Kardon system.

Final Thoughts The MINI Cooper S E Countryman ALL4 Plug In Hybrid isn't just a painfully long name, it's also the answer to a question nobody asked. But that doesn't mean it doesn't possess some admirable qualities. It's capacious for its size, seriously quick, well-made, and definitely attractive. That being said, the overstyled bits, tiresome quirkiness of the interior, and the awful brakes make us wonder if there's enough good to overcome the less desirable aspects. For those looking for more electric only range, there are better vehicles but they will cost you more.