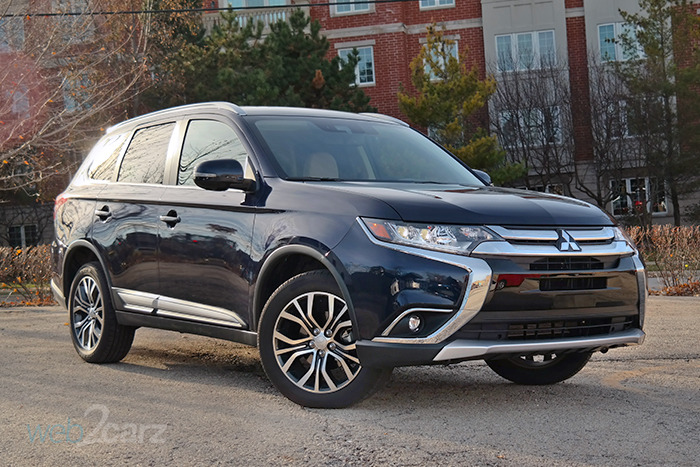 
Driving the Outlander is less than thrilling, since it doesn't accelerate, handle, or steer particularly well. The V6 engine in the GT 3.0 does make a considerable difference, so aim for that if you're willing to pay extra. The adaptive cruise control system is jerky and doesn't transition from acceleration to braking particularly well.

Ride Quality: The ride is pretty smooth, but it doesn't feel composed over large gaps.

Acceleration: 9.2 seconds to 60 is painfully slow, and the droning and mindless CVT doesn't help matters.

Braking: The brakes have a disconcerting spongy feel, but distances are acceptable.

Steering: The steering is suprisingly good. Though light, it's pretty precise and responsive.

Handling: There's ample body roll in the Outlander. The soft suspension and tires contribute to this, as well as the tall body.

Mitsubishi's in-car tech could use an upgrade in terms of look and operation. At least the screen is now bigger and easier to read. Overall, everything works just fine, and most families will have few complaints, especially at this price.

Infotainment System: We're happy to report the screen gets upsized from 6.1 inches to a full 7 inches standard.

Controls: The audio volume and power knob to the left of the touchscreen is too small and shallow, resulting in awkward moments when we shut off the sound instead of turning up the volume. The climate control temperature buttons look like round knobs but operate when pushed. Strange.

The Outlander has changed throughout this generation in order to look more upscale, and the result, overall, is a positive one. For 2018, it gets small upgrades that help keep it current.

Front: The fascia has a lot of chrome trim, but it's decently done. We just wish the C-shpaed trim pieces were a bit thinner.

Rear: The tall glass is nice, but there's a lot going on back here, especially with the two tone bumper and reflectors on the lower portion. It's just a bit too busy for our tastes.

Profile: Chrome trim is more muted here, and it has good proportions. This is its best angle. The simplicity keeps things tidy.

Cabin: It's not unattractive, but there is a lot of glossy black plastic in the cabin. It all looks a bit dated compared to its competitors.

There's a decent amout of room in the Outlander, though the third row is limited to kids. It's not exactly cushy, but it's just fine for most families.

Front Seats: Ample room but the cushioning is lacking, making the seats a bit on the hard side.

Rear Seats: Decently sized for adults, but like the front seats, they could use more cushioning.

NVH (noise/vibration/harshness): The interior is decently quiet with no squeaks or rattles, but the noisy engine intrudes when it's pushed.

Visibility: One of the Outlander's best aspecta is the excellent visibility thanks to a great seating position, big windows and thinner pillars.

Climate: The climate control system works well, as do the heated seats and steering wheel.

The Outlander gets high marks in crash testing, and it also gets upgrades in optional safety equipment, both good reasons for families to put this affordable 7-passenger crossover on their shopping lists.

IIHS Rating: It gets the Top Safety Pick rating, one shy of the + rating due to an 'acceptable' headlights and LATCH.

Though the Outlander isn't huge inside, it's still pretty convenient. It has enough space for most families, especially when the third row is folded flat.

Storage Space: There's a convenient open cubby at the base of the center stack, and the center armrest and door pockets are sizeable enough for daily gear.

Cargo Room: The Outlander has 10.3 cubic feet behind the 3rd row and 63.3 cubic feet with all the seats folded flat.

The Outlander ranks near the top of the heap when it comes to fuel efficiency.

Driving Factors: We drove it in Sport mode most of time to extract the most output from the meager four-cylinder engine. We split evenly between highway and local roads.

Our upgraded Rockford Fosgate 9-speaker system is pretty good and worth it even for the extra $3,000 SEL Touring Package since you get so many additional features for the money. The sound is clear and crisp but could use a bit more bass.

Final Thoughts It's hard to fault the Outlander since it does offer quite a bit for the money. Not every family can dole out $40K+ for a 3-row crossover for the family, and the Outlander presents itself well for its affordability. Unfortunately, in order to get a modicum of driving thrills, you have to upgrade to the V6 engine in the GT for a few thousand more dollars. But the four-cylinder will do just fine for most, and the safety and styling upgrades are much welcomed.