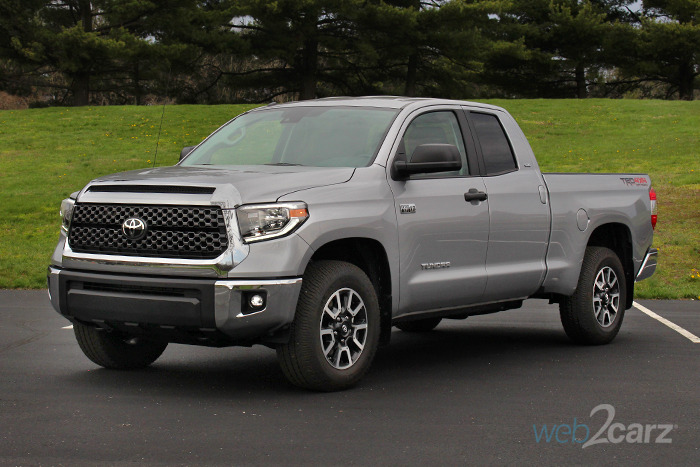 
The Tundra feels more truck-like than anything else on the road right now. Ram, Ford, and GM are working hard to smooth out their pickups, but the Tundra reminds you what it's like to drive a burly pickup.

Ride Quality: We certainly wouldn't call it harsh, but you feel the bumps in the Tundra more than in other pickups. The TRD Bilstein trail tuned shocks do a decent job, but if you want a smooth ride, one of the other competitors is the way to go.

Acceleration: The 5.7-liter V8 in our tester isn't the most powerful in the class, but it provides plenty of thrust. 0 to 60 mph happens in the mid 6-seconds.

Braking: The Tundra's brakes feel strong and progressive, and do a good job of bringing the pickup to a halt, but the competition stops quicker.

Steering: The Tundra has light steering with poor on-center feel. It doesn't transmit much through to the driver.

Handling: The Tundra rolls more than other trucks in the corners. It clings to the road decently, but we'd never suggest taking on a canyon road at speed.

Toyota's Entune infotainment system isn't anything to write home about. It's pretty far behind the competition in most ways. That said, what is there works well.

Infotainment System: The biggest issues with the system are its dated interface, unattractive graphics, and lack of features like Apple CarPlay and Android Auto. Toyota should take a peek at Ford, FCA, and GM's systems for a reboot.

Controls: The system features a 7-inch touchscreen, navigational buttons, and volume and tune knobs. Everything worked well, but the layout could be better.

The Tundra received minor exterior upgrades for the 2018 model year, and it's one of the best-looking pickups on the road. It's a masculine, tough look that helps set the Toyota apart from the more modern competition.

Front: The new grille and headlights help spice up the Tundra's look. Otherwise, it features a big and bold front end.

Rear: The rear is pretty basic with a few interesting character lines in the tailgate and vertical taillights.

Profile: From the side, the Tundra SR5's double cab gives the truck a well-proportioned look. It features a strong character line down low on the doors the leads into the bed, too.

Cabin: The interior of the Tundra is designed to be usable, not to look great. Toyota could spruce things up in here. That said, the SR5 is only the second trim level offered, so higher trims likely look better.

The Tundra offers good levels of comfort for all occupants. Unfortunately, it's not quite on par with Ford and GM trucks and is significantly behind Ram's new pickup.

Front Seats: The cloth seats in the Tundra offer good support and plenty of leg, hip, and head room. They could use more bolstering, though, and the material is just okay.

Rear Seats: The double cab rear seats offer a decent amount of space and a very upright seating position. The seats are supportive but on the flatters side.

NVH (noise/vibration/harshness): The Tundra feels solidly built. We noticed no annoying noises, but the big V8's throaty growl does make it into the cabin regularly.

Visibility: It's pretty easy to see out of the Tundra at all angles. Sometimes the truck feels bigger than it is, and placing the front end can be a bit challenging.

The Tundra doesn't perform as well in safety as its competitors. Both the IIHS and the NHTSA gave the model good but not great ratings.

IIHS Rating: The Tundra received 'good' ratings for all but the small front overlap crash tests. For those it got an 'acceptable' rating. The crash avoidance and mitigation was rated 'superior', and the headlights and child seat anchors received a 'marginal' rating.

NHTSA Rating: In NHTSA testing, the Tundra got an overall rating of four stars. It got four stars in both the front and rollover tests and five stars in the side crash test.

Optional Tech: No optional safety equipment was included on our tester.

The Tundra SR5 comes with a fair amount of storage options. The model surprised us with its interior storage spaces, but it lacked bed boxes of any kind. Many of the other models out there offer better storage spaces.

Cargo Room: The standard 6-foot 5-inch bed provides plenty of room for hauling everything from a couch to a couple of dirt bikes. It lacks bed boxes of any kind.

The big 5.7-liter V8 doesn't surprise you with good gas mileage. Toyota has had this engine for a while. It sucks gas down with gusto.

Driving Factors: We drove a good mix of highway and city miles. We tried not to be either overly aggressive or too careful with the throttle.

Our tester came with the Entune Premium Audio system. It features seven speakers. While it was good, we know that the upgrade from this system would be much better. The upgraded system is a JBL system with more and higher-quality speakers.

Final Thoughts The Toyota Tundra still looks good after all these years, offers a strong engine, and a history of reliability, but the model simply isn't as good as most of the newer competition out there. If you want a basic pickup, the Tundra SR5 certainly delivers that and more. That said, if you want something with modern appeal and a long list of technology features and amenities, your money would be better spent elsewhere.