You'll never guess this sophisticated Swede was made in China 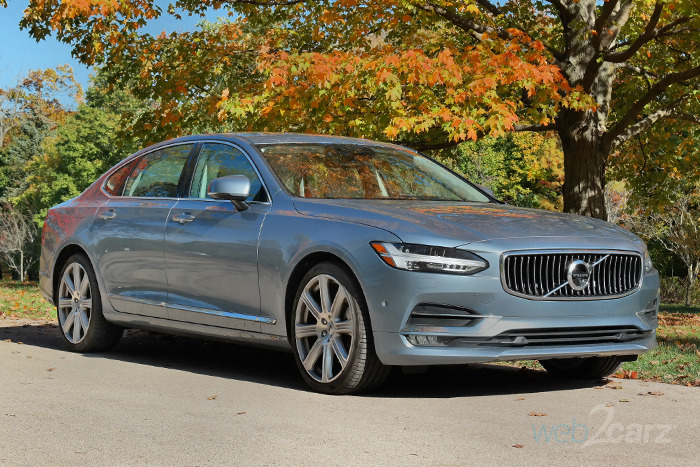 
Driving the Volvo S90 always feels like a surprise, and a pleasant one, at that. It's not only smooth but sporty and powerful. It might not be as composed as the BMW 5-Series or the Mercedes E-Class, but it's a great contender in this segment and doesn't leave driving enthusiasts in the dark.

Ride Quality: It's on the firm side but never harsh.

Acceleration: The turbocharged and supercharged 4-cylinder engine is strong. In Dynamic mode, the acceleration is surprisingly strong.

Steering: The electrically-assisted steering could use more feedback, but we never felt that we couldn't place it well into turns. Our tester's steering effort felt artificially heavy at times.

Handling: The S90 has minimal body roll, and we never upset the chassis in more aggressive turns. The stiffness of the shocks in Dynamic mode is upped, too.

Whoever thought the Swedes would do anything along the lines of slick tech, when it seems they've always primarily been focused on safety? Well, the S90 jumps light years ahead of the dated systems found on the current S60 and old S80, and every other luxury automaker should take notice.

Infotainment System: The big 9' portrait touchscreen is vivid and attractive, despite the fingerprints it accumulates. The system does experience some lag but only intermittently, which can be frustrating at times.

Controls: The touchscreen is responsive, and it's also nice to have audio buttons below the screen. The large steering wheel audio and cruise control buttons are easy to actuate, but the drive mode selector is fussy.

Take one look at the S90, and you can see that it looks like no other car on the road, nor does it mimic any of Volvo's last generation cars, not even in the least. It's also lower and wider than many of its competitors, giving it an aggressive stance that doesn't belie its luxury leanings.

Front: The large scoop-style grille that's almost like a Maserati Quattroporte is toothy and draws the eye, especially when it's flanked by the excellent Thor's Hammer t-shaped driving lights.

Rear: Though the back end is by no means unattractive, it's our least favorite view of the S90. We think the bracket-style taillights and the vast expanse of nothingness in between seem like an afterthought. The rear of the upcoming V90 wagon is far better. Expect changes when the S90 will probably get refreshed in a couple of years.

Profile: One of the car's best views is the profile, largely due to the steeply raked front and rear glass, as well as the shoulder line that runs the full length of the S90's svelte body.

Cabin: No one is doing interiors like Volvo, and the S90 in Inscription trim is positively stunning. We love the elegance of the AC vents, the contour and texture of the wood trim and the flatness and matte finish of the dash. Very original.

We're thrilled to see that in the pursuit of a stellar interior, Volvo didn't lose its renown for supreme comfort. Though the rear seats are quite good, it's the front seat occupants that get treated like Swedish royalty. The visual feast within adds to occupant comfort because it's like a minimalist but still breathtaking atmosphere. Nothing is overdone, but it's all visually relaxing. From the great visibility to the quietness, coupled with the interior functionality and styling results in one of the best automotive environments we've ever come across.

Front Seats: The front seats are supportive and cosseting at the same time, and we especially loved the near-infinite adjustment, along with the thigh bolsters that kept our backsides fresh on our road trips.

Rear Seats: Plenty of headroom and legroom, and the rear seats are quite comfortable, but the rear seat cushion sits a little bit low for our tastes.

NVH (noise/vibration/harshness): The S90 has a very quiet cabin, and there's no vibration that we noticed, even over some pretty rough pavement.

Visibility: The excellent seating position provides good forward visibility, and even though the windshield and rear glass are aggressively angled, there are no sightline issues.

Climate: Cools and heats like a champ, and unlike many other cars that do on-screen climate control, these were a cinch to use.

Volvos are supposed to be some of the safest cars on the road thanks to a longstanding reputation and a tradition of focusing on safety as a priority. The S90 gets a robust set of active safety technology that is class-leading. Every S90 gets Volvo's full set of safety features.

IIHS Rating: It gets a Top Safety Pick rating, just below the top score. This can be attributed to the 'marginal' headlights.

NHTSA Rating: The S90 has not yet been tested by the NHTSA.

The S90 does a solid job of providing good storage space throughout the vehicle, and the cargo room is not only spacious but easily accessible and well-shaped. There's ample space for small items in the center console, and enough room for a road trip with luggage for all occupants.

Storage Space: The center armrest is sculpted on the outside but roomy inside. There's a very small storage cubby just in front of the cupholders, but it's only good for tiny items like coins and keys. Door pockets are deep and long.

Cargo Room: Trunk space is wide and fairly tall, taking on big bags and items. The power trunklid is hands-free, and you can wave your foot under the bumper to activate it.

Turbo four-cylinders are generally more fuel-efficient than their V6 counterparts, and the S90 does well in this regard without suffering for power. It bests the V6 Mercedes-Benz E350 4Matic by 1 City and 3 Highway, so the mileage gains are there but not huge.

Driving Factors: We drove in Dynamic mode about 90% of the time to maximize throttle response and performance. Our time was split between suburban roads and highways.

Our tester came with the spectacular 10-speaker Bowers & Wilkins premium system that costs a substantial $3,200. That being said, the system is worth it because it sounds as beautiful as it looks. Crisp, clear and distortion-free even at high volumes, the system is a pleasure to listen to. We love the fact that you can set it to focus on the driver, passenger or the entire cabin.

Final Thoughts Two years into this model, and it still feels very fresh because of its huge departure from what the Germans are offering. For those who want something premium but very different from the mainstream, the S90 is worth a serious look. It drives well, moves quickly, and feels special enough to run with the European luxury pack, if not lead it.