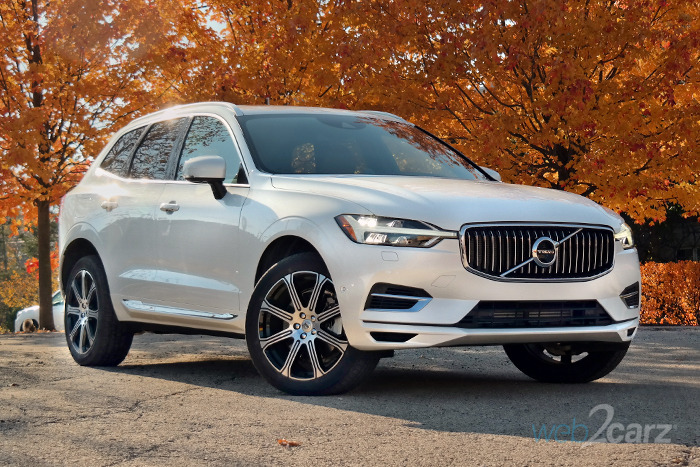 
Premium small crossovers should really deliver more than just power and luxury. They should strive for some semblance of driving thrills, and it seems that Volvo has found a good formula in the XC60 T8 E-AWD Inscription. It's not as good as the Audi SQ5 or the BMW X3 M40i, but it's very good.

Ride Quality: A great balance of firm and comfortable with no loss in comfort. It absorbs bumps and gaps well and never feels unsettled.

Acceleration: The supercharging at the low end eliminates any turbo lag, and the electric motor helps rocket this 400 hp crossover with alacrity. This is one fast Volvo.

Braking: The brakes can be on the grabby side, which is a little annoying. There's plenty of good stopping power, though.

Steering: The steering lacks feedback and could be quicker on turn-in, but effort is decent and not overly light.

Handling: There's some body roll, but the XC60 does fine in the curves thanks to the 4-Corner Air suspension. Just don't push it too hard since the XC60 is heavy.

In spite of some hiccups from the Sensus system, we love the technology in the XC60. It's not only cutting edge in terms of fucntionality and looks, it's also quite fun to use.

Infotainment System: The big Sensus touchscreen is marvelous, though it does take some time to get used to it. Volvo has done a wonderful job of being both modern and original.

Controls: There's occasional lag with the touchscreen, but we like that there are also audio knobs and buttons right beneath. Other aspects like the drive selector are great to look at but a bit finicky to execute.

As good as the XC90 looks, the XC60 is even better thanks to a more aggressive tail section and sloping rear glass. There's no mistaking it for anthing other than a Volvo, and it's one of the best looking vehicles in the Volvo lineup.

Front: The Thor's hammer headlights touch the outer edge of the grille that's thinner and slightly jomre angular than its bigger brother's. The fascia is stylish without being busy.

Rear: Volvo makes some of the handsomest and most distinct taillights in the industry, and the XC60's are great. They still retain the easily recognizable C-shape but add light bars that extend into the liftgate. It's also noticeably shorter in height than the XC90, giving it a sportier look.

Profile: The XC60 looks great from this view, and it's up there with the Alfa Stelvio and Porsche Macan in terms of presence. We like the short overhangs and the thick front end.

Cabin: With the distinct Maroon Brown perforated leather, charcoal trimmed interior, and stunning Driftwood dash inlays, we think it bests the XC90 tester we had last year. Everything looks great and feels wonderful to the touch. It's one of the best interiors in the industry. Just a quick note that the digital gauges and fonts Volvo uses are some of the best looking and easiest to read in the industry. Truly attractive.

Volvo doesn't ignore occupant comfort, and everyone else in the industry should study them. With some of the best seats in autodom, as well as an airy cabin for long trips, the XC60 rises to the top.

Front Seats: The Multicontour seats are just sublime. Great adjustability, cushioning and bolstering. We love the massaging feature that keeps you awake on boring commutes.

Rear Seats: There's enough room for adults, and the outboard seats are well contoured for longer trips. The middle position, however, isn't cut out for taller folks.

NVH (noise/vibration/harshness): The sound deadening in the XC90 is excellent, and the cabin is hushed even at higher speeds.

Visibility: The good seating position and manageable pillar size make it easy to place the XC60, but the large D-pillars necessitate the use of the backup camera.

Climate: The XC90 is superb when it comes to climate control. The system fires up quickly in winter, and the heated seats are fast and seriously warm.

We all expect Volvo to nail the safety category, and the XC60 absolutely does with some of the best technology in the industry and excellent crash test ratings. One more reason to choose this premium crossover for your family.

Standard Tech: In T8 Inscription trim, there's a lot of great tech that comes with it. The Oncoming Lane Mitigation tech is cutting edge, steering you back into your lane if you start to drift across the center line.

There's naturally less cargo room than found in the bigger 3-row XC90, but the XC60 is good for most folks with flat cargo space and the ability to fold down the 2nd row.

Storage Space: The interior has a nice retractable door for the cupholders where you'll end up storing most of your small gear items. The tiny space in front of them isn't good for much more than keys and coins. The center armrest (with beverage cooling) is large and deep and good for keeping bigger items out of sight.

The T8 E-AWD Inscription isn't so much about efficiency as it is about all-electric range (18 miles), and on-demand power. It does well, netting good numbers in our review.

Driving Factors: We drove in Power mode 100% of the time to maximize the car's responsiveness, torque and handling. We have no doubt more conservative driving would result in better efficiency. All electric range is a nice feature for urban commuters, but it does little to improve the XC60's efficiency.

Our very expensive ($3,200) and wonderful Bowers & Wilkins premium sound system is superb. It fills the cabin with rich and clear sound, and we experienced no distortion.

Final Thoughts We loved the XC60 in its top trim. It definitely exploits the power bump from the electric motor, but it's expensive (almost $20K more than the base price of the T8 E-AWD Inscription). Most folks will love the T6 and nothing will be lost in terms of fuel economy. The T8 E-AWD Inscription combines comfort, power, beauty, tech, and safety in an excellent package that families of four will absolutely love. There are faster premium compact crossovers (Porsche Macan Turbo) and the upcoming Alfa Romeo Stelvio Quadrifoglio, but few look or feel as nice as the XC60 T8 E-AWD Inscription.