Volvo goes back to small and delivers big 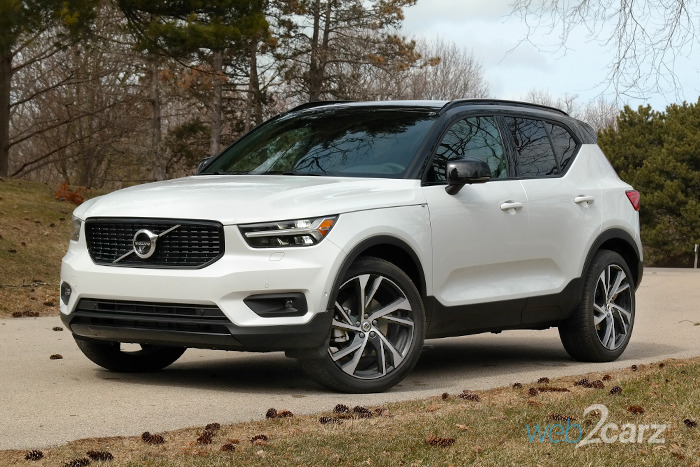 
We find it interesting that as you go down the ladder of the Volvo's crossover line, the better they are to drive. The XC90 is decent, the XC60 is good, and the XC40 is a pleasure to helm. Size does make a difference, apparently.

Ride Quality: Our T5 R-Design tester was on the firm side due to a stiffer suspension setup, but it still managed bumps well.

Acceleration: The 248-hp mill moves the XC40 quickly to 60 in a hair over six seconds. The engine, howerver, gets a bit buzzy when it's pushed. Throttle response is good with minor turbo lag. Dynamic mode really amps up the driving fun, and it delivers more than its competitors in terms of thrills.

Braking: The brakes are strong and progressive. We sensed no dead spots or mushiness in the pedal.

Steering: The XC40 has the best steering in the Volvo crossover family. Turn in is quick, and feedback is good. We also liked the effort, not too light and not too heavy.

Handling: There's a small amount of body roll, but it's negligible. The XC40 corners well.

The Sensus system is one of the better ones out there, if not for its speed, then for its aesthetics and attention to detail, though it does take some time to get used to it. The more we use it, however, the more we dislike the lag.

Infotainment System: The 9-inch screen is pretty much the same system found in the XC90 and XC60. The actuation of swipes and pushes could be faster.

Controls: Though we'd like more physical knobs, at least there's a home button and audio controls. Operating climate exclusively through the screen is a bit frustrating.

Volvo has done a great job of making the XC40 special without losing the ethos of its bigger brothers. It's more youthful and fun, though, without looking kitschy. Some might not like the Lava Orange carpet option, though, but we think it's brilliant.

Front: It's certainly less glitzy than the XC60 and XC90, but it still has great Thor's Hammer headlights and the distinct Volvo grille. This time, there's less chrome and more sporty black, giving it the right sporty look for its customer base.

Rear: The black bumper and black roof of our T5 reduced the visual height, and the simple tailgate looks great with minimal detailing. The signature Volvo taillights are still there in less complex form than the XC60.

Profile: Our black and white tester evoked a bit of police cruiser, but it still looks handsome from the side view. And even though the thick rear pillar obsucres sightlines, it gives the XC40 a distinct look among its competitors.

Cabin: The interior is even more special than the exterior. We love the aluminum dashed Cutting Edge inlays in the dash and doors that mimic the grille. THIS is how you make it sporty and original. It's such a fresh replacement for faux carbon fiber. As radical as the Lava Orange carpet is, we absolutely love it for its visual punch and originality.

The XC40 is clearly smaller than its larger stablemates, but that doesn't equate to cramped spaces. For its size, it's quite nice to drive/ride in. Just don't expect the same level of comfort as the larger Volvos. The CMA architecture will also underpin smaller Volvos in the future.

Front Seats: The seats are quite good but not with the same level of excellence as the XC60's. Good support, adjustability, and bolstering.

Rear Seats: 6-footers will feel a bit tight on legroom when taller occupants are in front. The seat cushion is also a bit on the low side.

NVH (noise/vibration/harshness): Other than the intrusion of engine noise, the XC40 is pretty quiet and well-built. It's not as hushed as its pricier brothers.

Visibility: Visibility is good out the front and sides, but the rear is obscured by the big pillars that are quite thick.

Though the XC40 hasn't been crash tested yet, we expect it to do well because Volvo has to uphold its reputation for safety. We scored it higher than average as a result.

The XC40 isn't huge inside, but it makes the most of its available space for both storage and cargo. Though our tester didn't have the optional removable cargo floor, it's great to know the XC40 can be outfitted with this system that's brilliant and incredibly versatile. All crossovers and SUVs should have this system.

Storage Space: The cabin has a well-sized center armrest, a nifty cubby with spring-hinged door just in front of the armrest that's great for phones, and great door pockets.

The fuel economy in the lower trimmed, less powerful engines will be available in the future. For now in the states there's only the top trim 248 hp engine. The T5 sacrifices efficiency for power and fun, but it still does pretty well for a spirited crossover.

Driving Factors: We drove our tester mostly in Dynamic mode to up the driving fun factor with almost equal distances on highway and local roads. More conservative driving and Eco/Comfort driving modes should net the EPA estimates without a problem.

Our upgraded Harman Kardon premium audio system sounded great, and the level of sound customization to suit the occupants is impressive. It's a very good system that's worth the upgrade.

Final Thoughts Volvo seems to be doing a lot of things right these days, and they're smart for building crossovers at nearly every level. The XC40 rounds out the family for Volvo, and it's a fantastic punctuation mark that exudes its own, more youthful flavor. Not only does it look and feel great, it drives incredibly well, making it a standout in the small premium crossover segment. It's also not nearly as pretentious as offerings by the other European manufacturers. Volvo has built a truly great small crossover that should once and for all eliminate any doubt that Volvo can build truly worthy small cars that sell very well.

Check Out Our Video Review: